Are you a Director, Producer, Editor, Digital Compositor, Visual Effects Editor, Art Director, Director of Photography, 1st Ad, Composer, Motion Graphic Artist, or Production Designer who is ready to commence a virtual production workflow starting from December 2019? Do you want to spend two weeks in Galway, named in the Lonely Planet’s Top 10 Best Cities of 2020? Then Apply Now for the Galway Stories: Through A 2020 Lens Project. You need to be experienced in your field – but not professional. 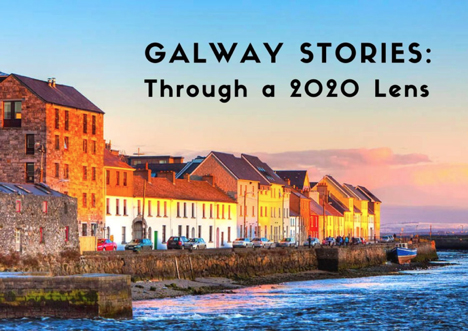 Galway 2020, European Capital of Culture and Galway Film Centre in partnership with Screen Talent Europe Network are looking for 16 crew members from across Europe to take part in a virtual production camp in Galway from the 6th – 22nd April 2020. Virtual production is where the physical and digital worlds meet, combining live action with VFX and game-engine technologies to enable production crews to see their scenes as they are composed and captured on set.

Sixteen European participants will be selected from the Screen Talent Europe Network to come together for two weeks in an intensive camp to create a short film based on stories of Galway and brought to life using Unreal Engine software. Unreal Engine is a game engine developed by Epic Games the brains behind the Fortnite phenomenon. During the preproduction phase participants will use this technology to create the world of the film while capturing live performances on green screen and merging the two together for the completed film, in an exciting new departure for filmmaking.

Facilitated by expert filmmakers from the Northern Peripheries network, participants in the workshop will work with experts allowing for the exchange of knowledge, mentoring and networking between talent from across Europe. The final film will then be screened as a culmination of the project.

Who are we looking for?

Email the following information to galwaystories@galwayfilmcentre.ie by Friday on 6th December 2019

Galway will be the European Capital of Culture in 2020. As one of the largest cultural events in the world, Galway 2020 promises to deliver a year of thrilling, life-enhancing experiences through culture and the arts. The exciting pan-European programme for the year will see events in unexpected venues and locations throughout the region on the islands, in remote villages, in fields, mountains and on beaches. From food, music, dance, literature and visual arts to poetry, theatre, sport and large scale spectacle, everyone will get the opportunity to enjoy a fun-filled, once-in-a-lifetime experience. You can view the programme for Galway 2020 on the website galway2020.ie

Screen Talent Europe is an international network for film workshops and media centers in 7 European countries and comprises 14 individual film workshops. The purpose of the network is to exchange knowledge, experiences and methods, through collaborations, network meetings and conferences.

About the Galway Film Centre

Galway Film Centre is a non-profit organisation dedicated to the development of film as an artistic medium in the West of Ireland. To this end, we support filmmakers, community and youth groups through education and training, equipment provision and information.

In 2014 Galway was awarded the prestigious title of UNESCO City of Film as a result of a bid led by Galway Film Centre in partnership with both local authorities and over 50 local companies involved in the audiovisual sector. Since gaining the designation Galway City Council, Galway County Council, Screen Ireland/Fís Eireann, Údarás na Gaeltacht and TG4 have all been involved in setting up a governance structure whereby the UNESCO City of Film offices are now housed within Galway Film Centre.